Are you ever drawn to a place – certain that you’ve been there before – maybe in a dream? When I was a teenager, I’d often dream that I was stranded in an ominous deserted mansion with my friends. There would be a sense of impending danger and we’d have to flee the house urgently. I still haven’t figured out what those dreams meant – but recently I saw a picture of this house on a friend’s facebook page and I couldn’t stop looking at it:

I’ve never visited this place, yet it is disturbingly similar to the houses I’ve seen in my dreams – from its grand proportions right down to its lack of ceilings. It’s located in the sugar fields of Negros Occidental in the Philippines. It was built in the early 1900s by a wealthy sugar plantation owner, but now only the concrete skeleton remains. Isn’t it so hauntingly beautiful?

This property – Kiddington Hall in England, doesn‘t have an eerie atmosphere about it – but I’m still drawn to it. I love the gardens (designed by Capability Brown) and the clean-cut shape of the building. It was in the news recently because it was purchased by Jemima Khan (UK socialite, Hugh Grant ex and a fashion icon).And now to the photo that inspired this whole “off-topic” post. This past weekend I was in a park in Ontario with my family. We were walking by the river, when I spotted this old house. I couldn’t stop looking at it, and I had to take several (blurry) cellphone pics of it. My sister asked me if I was taking pictures for my blog. That wasn’t my plan – but once she mentioned it – I thought it would be fun to post a pic here too.

This house isn’t as large or beautiful as the other 2 houses pictured, but there is something intriguing about it. The arches on the facade of this house are striking while its location (down a hill and surrounded by trees) makes it seem isolated. Even as we were walking away, I kept turning back to have one last look.Are there any common themes in your dreams? Are you inexplicably drawn to some places? I’d love to read about it in the comments! 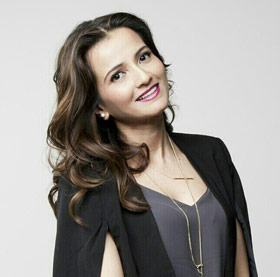